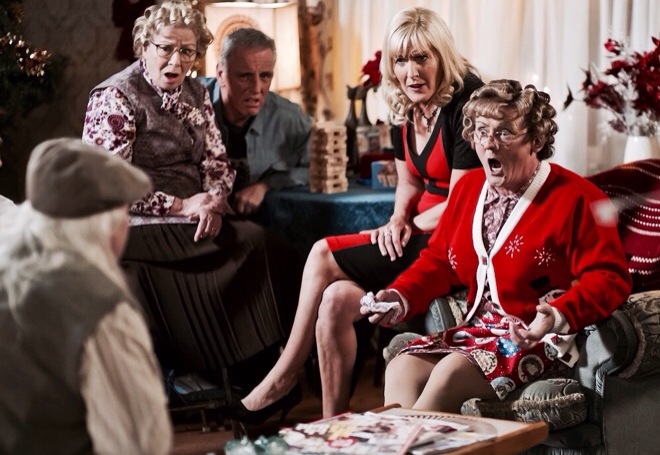 Christmas Day, at least on BBC1, has long been held up as the most important broadcasting day of the year, with a show’s appearance seen as a major honour – the televisual equivalent of an OBE. Certainly the perception of Christmas Day schedules is of a host of the biggest stars in Britain in some of the biggest shows, so you would assume that only the most established names would make an entrance.

Yet in recent years this hasn’t been the case and BBC1, in particular, have made some brave choices when it comes to the big day’s schedules. In 1999, The Royle Family‘s first Christmas special appeared on BBC1 less than 18 months after it had begun as a late night BBC2 experiment. Catherine Tate’s festive show in 2007 was the first of her efforts ever to be screened on BBC1, while Little Britain and Gavin and Stacey hadn’t long graduated from BBC3 by the time they enjoyed a swift promotion to the Christmas Day schedules. All enjoyed highly impressive viewing figures too, which illustrate the importance of refreshing the line-up with some new names and new shows.

So it was in 2013 that the honours for most watched programme of the day went to something that had again begun in modest circumstances – but Mrs Brown’s Boys was a bit different to some of the comedic fare that had made its debut on Christmas Day in recent years. Brendan O’Carroll’s panto dame-style character had made her first appearance on Irish radio more than 20 years ago, and had enjoyed cult success via stage productions until the BBC decided to take a punt on a TV version, which arrived on BBC1 in a late night slot in early 2011 with little in the way of promotion and a distinctly lukewarm response from critics. However the bawdy comedy struck a chord with audiences and via word of mouth and a repeat or two started to pull in huge audiences, with the special on Boxing Day in 2012 getting the highest rating of the entire festive season. Hence this year it was an obvious choice for Christmas Day itself, and “Buckin’ Mammy”, to give it its typically unsubtle title, was the highest-rated show of the day, with 9.4 million viewers.

Okay, so few would hold it up there with some of the comedy shows that have appeared on the 25th in the past, but for every Only Fools and Horses and One Foot in the Grave there’s been a Bread and a Birds of a Feather, so it perhaps wasn’t quite the new low that some would have you believe. One thing that was unique though was probably the amount of swearing it included – surely the first f-words on Christmas night BBC1 ever?

Regardless of your views of Mrs Brown, though, it did provide some comedy on a night that seemed otherwise bereft of laughs. Following Mrs Brown at 10pm was Michael McIntyre. Two years ago the Marmite comedian had done decent business in a late slot with his Christmas Comedy Roadshow – but this wasn’t that; instead a first TV screening for his most recent DVD. A big show maybe, but on a night when you expect something a bit out of the ordinary this seemed a pretty half-arsed affair, up there with 1978’s True Grit – A Further Adventure. Opening with 10 minutes of jokes about the 2012 Olympics surely just emphasised that we were getting some second hand stuff here, with distinctly average ratings to match.

The rest of BBC1’s Christmas line-up had been motoring along fairly steadily up to there, starting in familiar form with Breakfast, the cartoons and the service and two animated movies in Chicken Run and The Princess and the Frog which saw us through to lunchtime in amiable fashion. Just as familiar was what followed at 2pm. With continued newspaper stories about some of its previous presenters, and the weekly show now a distant memory, the return of Top of the Pops seems less likely every year, but here it was again a week before its 50th anniversary – not that anyone seemed particularly interested in celebrating that fact.

The annual word from Liz was followed by, surprisingly, the teatime news, clearing the decks for non-stop entertainment until late at night. That began with the premiere of Toy Story 3, an excellent choice for the afternoon and also making it the only film series where every instalment has premiered on Christmas Day (a honour previously held by Indiana Jones for some 20 years before they decided to make a fourth). After that came Strictly Come Dancing in its earliest ever Christmas Day slot of 5pm. Again five new celebrities took to the dancefloor, although none seemed particularly more interesting than those we’d been following for the past three months. Nevertheless the all-round family fun made it perfect for teatime vegging out.

Then came a triple bill of drama, and the second Christmas Day outing for Call the Midwife. Last year’s special seemed somewhat out of place as the centrepiece of Christmas Day and was roundly criticised for being far too gloomy. This year the latter was addressed, at least, with a more frivolous storyline including a wedding, though its slot at 6.15pm seemed even more out of place, surely inviting most dads and kids to switch over. The ratings proved fairly stable year on year, though, but still down on the kind of figures it receives any other day.

This year though the midwives ceded the prime slot to Doctor Who – and rightly so. In the year of its 50th anniversary and, in this programme, a brand new Doctor, it received the plum 7.30pm slot and, while it finished in second place to Mrs Brown’s Boys in the overnight ratings (before those who recorded it or watched online are added), the moment where Matt Smith became Peter Capaldi was the most watched thing of the whole day with over 10 million tuning in to see this little piece of telly history.

Next came EastEnders, which for the past four years had been the most watched programme on the big day. However this Christmas came at the end of a pretty poor run for the soap, with dwindling figures and a revolving door of cast changes, while viewers seemed unimpressed with some less than gripping storylines. Mindful of the boost the show normally gets on Christmas Day, the production team therefore took the opportunity to mount something of a relaunch with Danny Dyer making his debut as the new landlord of the Vic (though quite why you’d buy a pub on Christmas Day was never adequately explained). Unfortunately this wasn’t enough of a boost to interest casual viewers and for the first time since 2000 it found itself beaten by Coronation Street as it slipped to fourth place in the day’s chart. We’ll have to wait until next Christmas before we can judge whether Dyer’s arrival will help lure back lapsed fans.

After the McIntyre DVD, and the late news, BBC1 rounded off Christmas Day in by now traditional style with a few comedy repeats, including The Vicar of Dibley from 1996, and a late film. Overall it hadn’t been a vintage Christmas for BBC1, with new comedy extremely thin on the ground. The individual programmes – bar EastEnders and McIntyre – seemed decent enough, we just needed more of them.

For ITV, where Christmas Day in the past has often been a case of damage limitation at best, the fairly credible showing they’d put in for the last few years was enough for the commercial channel to say “same again” – indeed, almost literally. After an unusual head-to-head clash of news bulletins at 3.10pm (though for ITV it was a late lunchtime rather than an early teatime bulletin), the schedule was virtually an exact repeat of 2012 – the film Tangled, Paul O’Grady at Battersea Dogs Home, Emmerdale, Coronation Street and Downton Abbey, followed Love Actually, which was no stranger to Christmas Day on ITV.

Compared to last year, Tangled and Paul O’Grady fell foul of BBC1 juggernauts but Emmerdale perked up a bit running head-to-head with Call the Midwife, as opposed to 2012’s thankless slot as stooge to Doctor Who, though still didn’t beat its BBC opposition – one of the few days of the year that’s the case. Despite facing Doctor Who, Corrie was virtually neck-and-neck and managed to beat its London rival for only the second time this century, but Downton posted another bog-standard rating – though obviously far better than more or less everything else they’d shown in this slot before it made its first appearance in 2011.

As for the other channels, a major shock on BBC2 – no Dad’s Army repeat! Instead the comic relief came from The Two Ronnies and a Morecambe and Wise compilation. It was a very good day for Mark Gatiss too, with his drama on the creation of Doctor Who, An Adventure In Space and Time, getting a repeat outing in the afternoon, and then at 9.30pm came his adaptation of MR James’ The Tractate Middoth, followed by his tribute to the writer himself.

Channel 4 again aimed for the mainstream with animation, family films and Deal or no Deal during the day, while a screening of Home Alone 2 at 6.15pm no doubt offered sanctuary for families unimpressed by the female-skewing offerings on BBC1 and ITV and pulled in the biggest audience away from the main channels of the day. A new show from Alan Carr and a special of Greg Davies’ sitcom Man Down meant C4 actually offered up more new comedy than BBC1, not something that’s happened before. For Channel 5 it was pretty much businesses as usual too – old films during the day, including Gone With the Wind again and Casablanca, then Eddie Stobart in the evening. Just the one hour with the truckers this year, though, with the main attraction being the premiere of the ghoulish documentary Michael Jackson’s This Is It.

In fact despite BBC1 not quite firing on all cylinders, and what would appear to be a far more attractive schedule than in other years, ITV was actually only ahead of BBC1 for half an hour from 10pm when Michael McIntyre was on. That’s testament to how, for many people – regardless of some rather illogical scheduling and threadbare bits of the schedule – Christmas Day continues to mean BBC1.