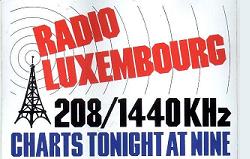 ONCE ALL-CONQUERING only realistic rival to the BBC (barring the Pirates, which weren’t exactly state-approved, and kind of fall just outside the three mile exclusion zone-esque limits of the Radio Cream era anyway). The Duchy-centric UK-targeted All Pop And Nothing But service employed washed-up ex-pirates, up and coming new stars and big names who’d got into ‘trouble’ (ie Kenny Everett) to play a mixture of hits and ads, some of the latter – notably Horace Batchelor and his pools-cheating ‘K-E-Y-N-S-H-A-M’-heavy plugs – becoming almost as well known as the pop platters. Fortunes took a nosedive after the launch of Radio 1, and where the station was once big enough to command its own weekly magazine, by the eighties it was struggling to be heard at all (occasioning a series of embarrassing ‘please listen to us’ cinema ads with excruciating “shhh – I think I found ze knob!” punchline), and the 1992 closedown as grimly chronicled for a TV documentary could only muster about three former ‘names’ into the studio to say goodbye. Still, it once formed a pivotal part of the pop firmament, so much so that people get all misty-eyed even when talking about its prone-ness to signal fade.