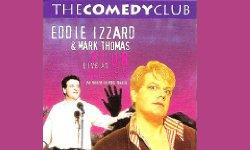 BLATANT Lamarr-hosted attempt to ride the Comedy Is The New Rock’n’Roll bandwagon with the latest exciting standups captured in a rowdy pub setting, amongst them Eddie Izzard, Mark Thomas, Jo Brand and an audibly struggling Vicky Coren, who probably shouldn’t have been up that late on a school night.