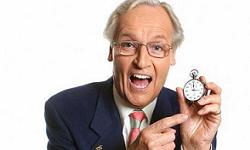 AND as the minute waltz fades away Radio Cream you have sixty seconds to talk about in this game, without repetition, hesitation or deviation, Just A Minute: Just A Minute is a long-running panel game where the wonderful chairman Nicholas Parsons [BZZZT: “He’s not wonderful”] invites four lovely players of this game, like the great Clement Freud, Kenneth Williams, Derek Nimmo, Paul Merton, Peter Jones, Gyles Brandreth, Julian Clary, Barry Cryer, Tony Hawks, Kit Hesketh-Harvey, Tim Rice, Sue Perkins, Wendy Richard, Ross Noble, Graham Norton [BZZT: “You can’t just keep naming contestants”] to talk about a given subject for sixty seconds without repetition, hesitation or deviation, whoever’s speaking when they hear the whistle gets all the greatness and all the glory [BZZZT: “Repe… oh hang on, it was great and greatness”] and we’re indebted to Ian Messiter who created this ga*PHEEP*