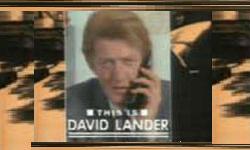 YET ANOTHER early vehicle for Stephen Fry, this time in the guise of not-at-all-Roger-Cook-libelling investigative journalising incompetent David Lander, with a series of hard hitting reports on cowboy builders and sanction-busting trade agreements, and most famously a series-long snoop into attempts to build a third London airport in Birmingham. Also yet another example of BBC TV’s boat-missing when it came to late eighties radio transfers, winding up on Channel 4 as This Is David Lander.