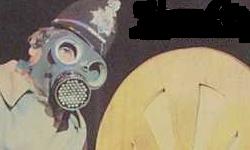 “WOAH woah weeeeeeeeeeee, are The Grumbleweeds”… quasi-legendary, verging on the ‘notorious’ end of the scale, radio vehicle for the five-piece purveyors of finest ‘joke’n’roll’ whimsy. Roster of comic characters included an endless parade of ‘Uncles’ such as Cream-predicting trivia fiend Uncle Rubbish and the not-at-all-Eric-Pode-plagiarising Uncle Nasty; Wilf ‘Gasmask’ Grimshaw, who for some reason still wore his gasmask on the radio; the risibly-named Fred Fibber; and hours upon hours upon hours of impersonations of Jimmy Savile. Mock-‘edgy’ comedy par excellence and the sort of thing that the office joker was addicted to, outlasting the mind-boggling television version – where, hilariously, they maintained the ‘Radio Show’ monicker.