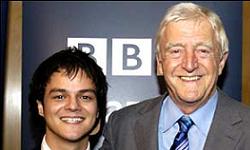 SERIAL-defecting grumpy bastard outstaying his welcome on Sunday mornings with a subtle blend of moaning, whingeing, pomposity, outrageous pronouncements on sport, and ‘the very best in music’ (ie Jamie Cullum, Jamie Cullum, Jamie Cullum, Jamie Cullum, and a load of ‘big band’ drivel lasting for eight minutes plus which he insisted on smugly praising at front and end whilst simultaneously scoffing at ‘pop rubbish’ like, erm, Pet Sounds), interspersed with ‘highbrow’ chatter with the sort of broadsheet columnists you wished had bloody well stayed on the printed page. Made Steve Wright’s Sunday Love Songs look tolerable in comparison, frankly. Left in 2007 amidst a load of self-perpetuated ‘end of an era’ hoo-ha to concentrate on his hobbies of sneering at anyone who wasn’t as clever as or a ‘journalist’ like him, moaning about young girls dying of cancer, and droning on and on and on and on and on about Billy fucking Connolly.