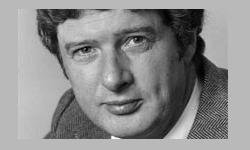 UNSUITABLY monickered for those sung Radio 2 jingles (“Johhhhhhhn Duuuunnnnnnnn!”) Breakfast Special swivel chair-occupier in pre-Wogan Long Wave days, later hotfooted it over to drivetime duties with his daily ‘After Six’ interviews and first incarnation of the still-going Mystery Voice competition. Also, it has been noticed, spoke ‘BBC English’ like his life depended on it.