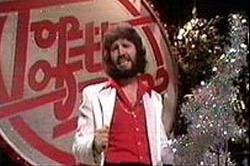 BASED ON THE MISGUIDED THEORY that, if you were alone on Christmas Day, listening to a tape of Mike Read giving DLT a box of pipecleaners would somehow make you feel better; however, seething inter-DJ loathing was never far from the surface, and ultimately the only saving grace of the whole debacle. Also notable for dominance by the ‘Welly Boot’ mafia, with the more specialist presenters – normally contractually forced to attend – paid the merest of lip service; John Peel recalled being asked “you’ve got a family – how will you be spending Christmas?” every single year. Eventually began to buckle under the changing nature of the network, leading to an inexplicable last-ditch bid was made to save it by having the meal ‘at’ Grey Gables, during the darkest hours of The Archers when they’d do anything to get a few column inches, so not only did everyone have to pretend to like Simon Bates, but also pretend they were in a restaurant run by Jack Woolley. Who isn’t real. The other side of this link up saw John Peel – supposedly at school with Robin Snell – visiting the village (strangely, the rest of the DJs never made it down to The Bull) and sounding like a particualy poor impression of himself. Before you could say ‘Quack Quack Oops’, we had the likes of Take That presenting the pre-recorded festivities instead.