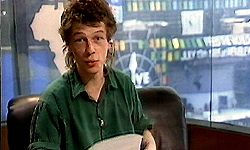 VOICEOVER-monopolising ‘professional northerner’ and Liz’s rather more credible brother roped in as response to a brief World Music craze, which lasted for about a fortnight in the mid eighties when Janet Street-Porter’s mates all bought the same Bhundu Boys record and then forgot to listen to it. Dry wit and patronage of Peel and Walters ensured he stayed around, but as time went by became an increasing incongruity and pushed further and further into the night until he vanished completely.