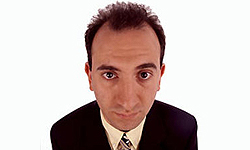 NOW BETTER KNOWN as the supreme overlord of sweary heavyweight satire, but in a former life a gag-friendly tape-fiddling indie DJ for Radio Scotland, which led to this short-lived (partly because Johnny Beerling hated it) Radio 1 gig. In short, the usual expected gags about religious extremism and the week in Parliament, interspersed with lampoonery of Radio 1 schedule hallmarks, bonkers home-made remixes, listener-enraging disdain for Kurt Cobain and opponents of Gay Rights, and lots of noisy American guitar types. Not the most conventional Radio 1 show of its day, it’s safe to say.