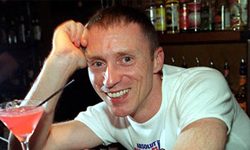 MUCH-MISSED master of tape-fiddling who started off messing around with bits of old adverts and Camberwick Green in a Weekend Breakfast slot, before graduating to lunchtimes where he perfected such demented features as the ‘Mr Whippy’s Van’ quiz, the exploits of faded sixties hipster Raymond Sinclair, and the epic-length surreal monologues of Eric The Gardener. Convoluted career path involved plans to move him to The Graveyard Shift when Mark & Lard took over Drivetime, derailed when Chris Evans left unexpectedly early and Greening doing a bit of Breakfast stand-in while the duo were readied for that slot, before ending up in ‘Driveltime’ himself. Kermode-supported irate pisstaking of slot-related inanity followed by a move to Breakfast alongside Zoe Ball, bringing back all the old characters plus some new ones (including xenophobic travel report maniac Major Holdups) but not really working and he was off within the year. Radio 1 seemingly couldn’t be bothered finding him a proper new slot again, and wasted one of their best ever talents on swing jock duties, to the audible dismay of Mark Goodier after he said goodbye to Greening on-air for the last time (“one of the best DJs this station’s ever had”). Radio has never been the same since.