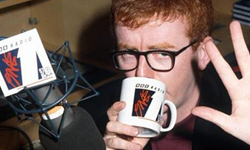 INITIALLY AFFABLE inventive bloke in oddly-named Sunday lunchtime slot Too Much Gravy, revolving around such offbeat gambits as Mind The Gap, basically phoning an unsuspecting celebrity during a brief bit of silence in a pop record. Then he had a couple of big TV hits, and was duly repositioned as a Britpop-toting ‘Zoo Radio’ Breakfast host intended to increase Radio 1’s listenership tenfold. It worked for a bit, but then he got obnoxious, then arrogant (especially about his friendship with the Brothers Gallagher and the incredible feat of being more popular than a local radio DJ in a remote part of Scotland), then unlistenably vitriolic about individual Radio 1 ‘suits’, and finally tired and emotional before sidling out through the back door to concentrate on TFI Friday.

Related Items:Chris Evans, phoning up Parky in the silence in the middle of REM's Radio Song, that music off of the Test Card Classics album, the oh so hilarious nickname 'Ginger Whinger', those boring 'zoo' cohorts that thankfully sodded off straight afterwards, unimpressive showing off about socialising with Shed 7, whining about 'the laddish sound' should be left for the hand-wringy websites though
Share
Tweet
Share
Share
Email