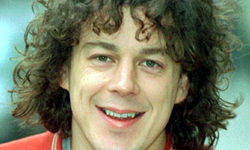 ONE OF A NUMBER of exciting new comedians brought in to try their hand at being DJs in the mid-nineties, starting off trying to do it relatively ‘straight’ and floundering badly as a result, before throwing in the towel completely and building the show around an insane narrative about trying to tunnel under the earth to meet The French Alan Davies (no, really), complete with zany characters like indie moaner Stacey Ringworm, eco-friendly early Bill Bailey creation Jake The Crusty, and ‘Alan’s Mad Ex-Bird’. Last seen repositioning the show as a parody of Chris Evans’ Breakfast hoo-hah, with a couple of quite good parodies of the likes of Whigfield, before Jonathan Creek came calling. Show was also temporarily home to highly banned Michael Redmond sitcom Eammon, Older Brother Of Jesus.