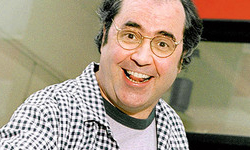 BROADCASTING’S HOTTEST PROPERTY parachuted in as cornerstone of Bannisterisation process, replacing tired time-honoured Weekend Morning riffathon tradition with phone-in based disorientating proto-Cream blend of bewilderingly esoteric nostalgic chatter, ridiculous stunts performed over the phone, bizarre listener-experienced real-life events, quests to find the scariest musical note ever (“Why don’t they just pull over and let him park?”) and the most insane rendition of Smoke On The Water (including one played on ‘kindling’), and the frankly indescribable The University Of Turmoil. The best thing ever broadcast on Radio 1 by some considerable distance but sadly never caught on, due partly to witless tabloid hate campaign, and the show was steadily shaved of running time (“We’re like Boxing Helena!”) until there was literally nothing left of it.