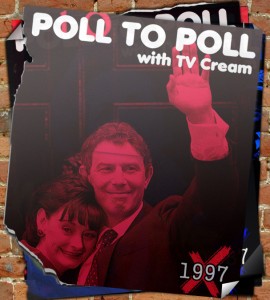 It’s the last of TV Cream’s election-themed weekly podcasts, and we’re concluding with a journey back just 13 years to 1997.

It was the election that saw Paxman proffering hemlock, an asteroid hitting the earth and Edwina Currie being buried under several hundredweight of shingle.

Aside from our usual eye over the Beeb’s election night coverage, we:

– salute the many and varied on-screen election commentariat, otherwise known as humble spear-carriers, in Election Essentials;

– rifle amongst the party political broadcasts of 1997, with a quick detour back to Brixton market in 1992;

– once again try to put our finger on the big TV satire show of the year;

– and hear what David Butler thinks will be the result of this year’s general election.

You can download it from TV Cream; you can subscribe to it via iTunes; or you can listen to it right here:

With special thanks to David Butler and Brian Lindsay.