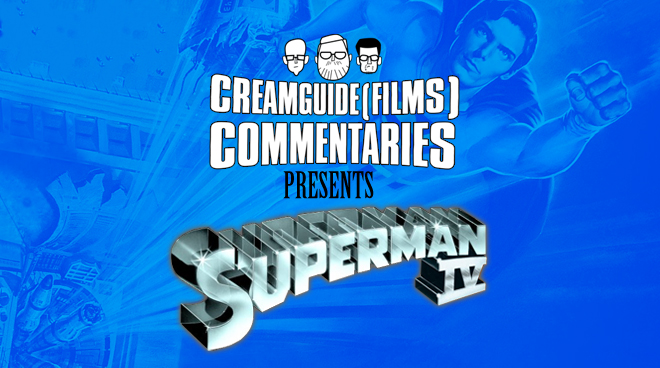 What links Superman and Strathclyde Regional Council? Why, it’s the latest CREAMGUIDE(FILMS) COMMENTARY! This time it’s prime Cannon-fodder Salkind-lite utter shite SUPERMAN IV from 1987. Listen as Chris, Craig and Jack can’t even be bothered to swear about the desperate nonsense that killed off a franchise. Top men. Top. Men.

Click above to hear… if you can! Or download it (it’s 83 MB). If you haven’t already, you could also subscribe. And this is our RSS feed.

SPOILERS: Elizabeth Shaw cosmic chocolate selection on post-Christmas special offer in Tesco (at the time)
CREAMGUIDE(FILMS) REVERSE FAQ
1. Omnibus “The Last Moguls” from 1988
2. Kim Hartman
3. And Switching Channels, which is fun
4. Moribund and excreta is a Til Death Us Do Part reference. Just sayin
5. The Famous Teddy Z ran from 1989 to 1990 and featured no one and nothing happened
6. Total domestic gross $15, 681, 020
7. With the never-more-Yankee name of Mac McDonald
8. Terry & Mason’s Great Food Trip
9. He was a Chippendale and is from Leeds. Which somehow doesn’t add up
10. Leader of Strathclyde Regional Council
11. And in fact the other ‘Top Men’ from Raiders is the estate agent in the Stetson at the start
12. He isn’t
13. Yes he is
14. No idea. But he owns a Model T Ford. It says here
15. Actually, we remembered that sequence as being much better than it is. Probably out of desperation
16. There was but it got shelved after this shambles
17. On February the 6th
18. Poor Paul. We’re all thinking of you

Creamguide(Films) will return with … a special superstar treat!