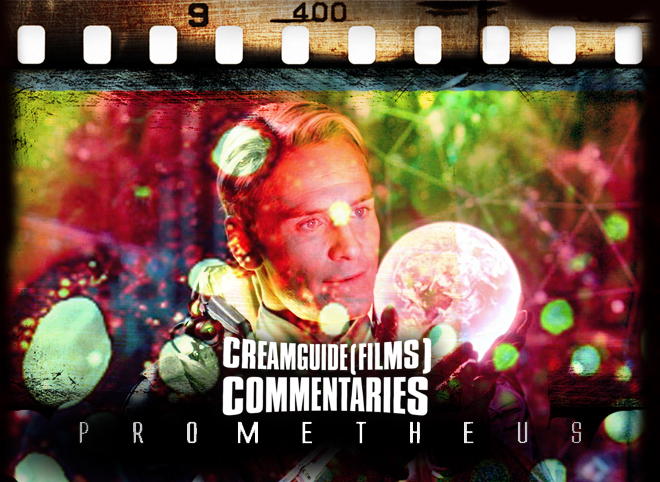 Back with even more shouting and in-jokes – and taking combination swearing to dangerous new levels – join Chris, Craig, Martin, Jack and Rose for a raucous roller-coaster ride of profanity and derision so big, only the biggest of the big screens can do it justice. Yes, ‘Sir’ Riddler Scott’s monumental Alien sequel (prequel?) PROMETHEUS. Please check for level before playing just as the ident fades away.

Here’s the usual script, you might be able to listen to it above. Or download it here (it’s 114meg). If you haven’t already, you could also subscribe. And this is our RSS feed.

1. Millions of years ago, apparently.
2. But this is 2089.
3. So did they come back at some point and pose for cave paintings? No one notice the space ships?
4. He died in 2005. Callous bastards.
5. Patrick Wilson.
6. Apparently he modelled his performance on a mingling of Peter O’Toole, Greg Louganis, David Bowie and Dirk Bogarde. Which sounds like a mingling that may have occurred to Dirk Bogarde at some point. Just as well we can’t view those dreams.
7. Sigh
8. …
9. …
You know what? There’s just too much for this. So we’ll leave you with two points:
– He played ‘Trey’ in SUNSHINE. He hung around this set long enough to appear in THE MARTIAN.
– “Our timeless recipe made with quality dark chocolate, infused with mint oil and blended with our unique, melt-in-the-mouth honeycomb crisp. Individually wrapped in foil to make every chocolate feel as special as the last. Arranged in the iconic Elizabeth Shaw octagonal box, we think they make the perfect accompaniment for a dinner party with friends, or indeed an indulgent treat for yourself as you work your way around the box, one by one!” (no mention of deep space exploration)
That’s enough of that.

Creamguide(Films) will return with a film they actually like… in SPACE!