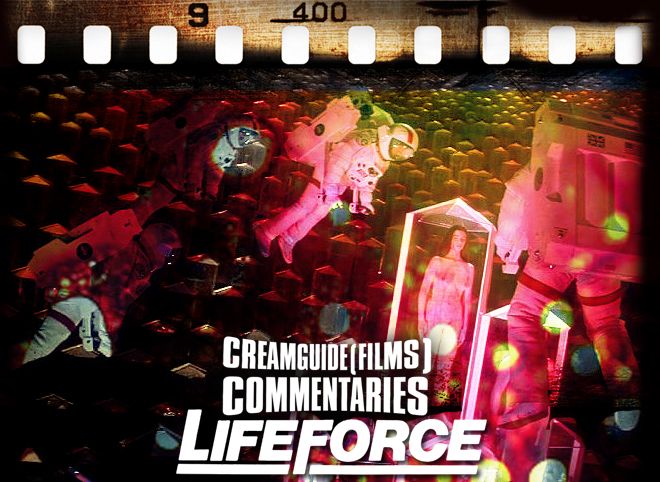 Come back to the ’80s with Chris, Craig and Jack as they watch Tobe Hooper’s splendid dance of the space vampires LIFEFORCE. Shot into space by Cannon films, join in the repetitive ridicule of Dan O’Bannon and the spotting of obscure tourism campaigns while we are treated to Aubrey Morris and Patrick Stewart: together at last! Turn on the commentary as the Cannon logo appears and try to spot the ‘brash guard.’

To listen, click on the thing above if your browser so allows it. Or download it here (it’s 109 meg). If you haven’t already, you could also subscribe. And this is our RSS feed.

1. No idea
2. This was the first of his three picture deal with Cannon
3. Colin Wilson thought it was the worst film version of a novel ever made, it says here
4. The Stuntman, basically
5. No, he isn’t
6. Tom Atkins
7. Brian Marsh
8. Joe Claro
9. 80
10. Freddie and Max
11. Actually, he was a newsreader for the BBC between 1968 and 1973
12. Albert Hague, wrote four Broadway musicals and the score for ‘The Grinch Who Stole Christmas’ but not ‘Starmaker’
13. We actually meant Jack Warden. But Jack Warner works as well
14. ‘thanatology’ θanəˈtɒlədʒi/ noun: “the scientific study of death and the practices associated with it, including the study of the needs of the terminally ill and their families”
15. Top 50 dramas and it was No.16 actually, in between Six a Feet Under and Smiley’s People. But since Six a feet Under was above Smiley’s People the list is clearly a pile of shite
16. We were getting confused with the Australian films featured in the documentary feature ‘Not Quite Hollywood’ by the same guy which is also great
17. Great as Aubrey is, that was meant to be Ronald Lacey
18. 1986 – 1989
19. Still wasn’t
20. Nope
21. He isn’t
22. That was actually meant to be Johnny Sconney Gielguid. Turned out they couldn’t afford him
23. 1987 – 1994
24. No he isn’t but he was in The Mallens
25. Nope, nothing to do with him. Good play, mind
26. It might actually be Elstree
27. He was

Creamguide(Films) will return with a festive treat