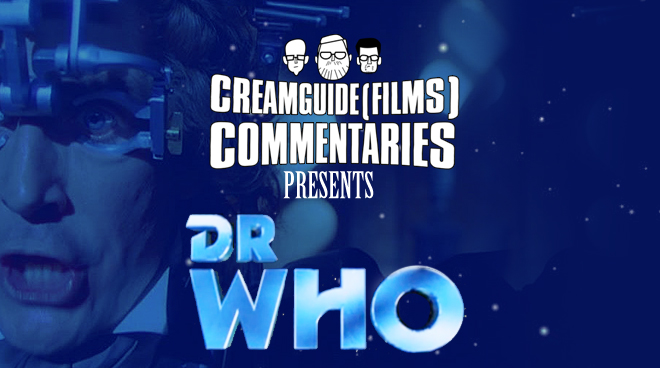 CREAMGUIDE(FILMS) COMMENTARIES is back! Back! BACK! And it’s about fucking time too. Join Chris, Craig and Jack in an adventure in Rosemary and Thyme (or Bramwell) as they pick over the DOCTOR WHO TV MOVIE from 1996 – on the very anniversary of its UK transmission – in fine style stopping off to hear from commentary regulars Father Lionel Fanthorpe, Michael Caine and Bob Mills (or Keith Richards) with special guest references to Patsy Byrne and Len Kabasinski: together at last! It’s the DVD version that kicks in straight off the bat. So press play from the off and enjoy some barely relevant chat that is at least half human.
If you don’t want to listen to it using our player (above), then download it (83.5 MB). Or, to save you all this hassle, just subscribe to our podcast via iTunes. And this is our RSS feed.

1) 14th May, 1996
2) He’s been in lots of stuff, all of it shit. Except late period Brush Strokes when it got miserable and an episode of Boon which was always great
3) We preferred Dr Quim
4) Just over 9m
5) Southend, as it goes
6) He’s a Canadian comedian. Quite successful, surprisingly. We imagine he shouts a lot
7) It was indeed simply called ‘John Sessions’ from 1990
8) It was Patsy Byrne!
9) Couple of other TV movies; Catherine the Great and The One that Got Away
10) Diana Weston
11) Clyde Bruckman’s Final Repose from 1995
12) Luis Silverado. It also featured Richard ‘don’t mention the dog’ Todd, John ‘Q’ Bluthal, Enn ‘de Bargos’ Reitel, Hywel ‘Tarr’ Bennett, Paddie ‘Alfred Marks’ O’Neill, Helen ‘Naked Video’ Lederer, Ron ‘Pod’s dad’ Donachie, A Taste of Dora Bryan, Judi Spiers, Bernard ‘sandwich’ Bresslaw and a further constellation of stars no one but we remember
13) Vortex is a very thick bleach

CREAMGUIDE(FILMS) COMMENTARIES will return with a day of the great British holiday.