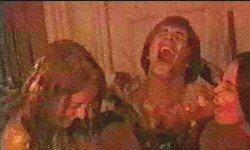 ‘Coming Of Age’ dramas about young men seeking their identity in the dying days of the sexual revolution were pretty much ten a penny (or, if you will, ‘dime’) during the late sixties, especially if they were in turn based on a ‘Best-Selling Novel’. This one, though, was a bit different, and for the right reasons (which, of course, are the wrong reasons as far as MGM would have been concerned, but that’s by the by). A frighteningly young Don Johnson stars as Stanley Sweetheart, a film student who is frustrated by the prudishness of his female classmates and unwanted attention from that ever so slightly dodgy standby of sixties American cinema, the Respectable Older Male Whose Clean Lifestyle Harbours Clandestine ‘Gay’ Ambitions, until he stumbles across free love courtesy of a dowdy blonde flatmate, and throws himself into a life of full-throttle partying, drug-taking, ‘chick’-having and, erm, beard-growing, ending the film happily installed in a menage a trois with two Trade Descriptions Act-defying ‘lesbians’. Never did “there is no moral, it’s just a bunch of stuff that happened” seem like a more apt summation. And what’s the soundtrack to all of his far-out experiences? Only unhinged easy listening standard-in-waiting Sweet Gingerbread Man, that’s what. They really, really don’t make them like this any more.