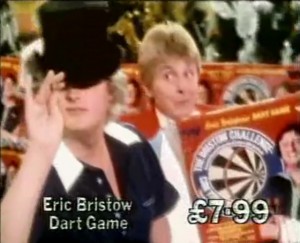 The big massive all-singing all-dancing Woolworths spectacular was every bit a part of the countdown to the festive season as calls to Dial-a-Santa and pencil-sucking deliberation over your Christmas list. Taking up – gasp! – an entire commercial break, the mighty Winfield empire recruited a cavalcade of stars to endorse their glittering array of yuletide delights. Like Anita Harris, Bill Oddie and Tim Brooke-Taylor, inviting us to ‘have a cracker of a Christmas shopping spree’ to the strains of a ‘Super Trooper’-esque soundtrack, as a load of Cossack dancers and a Lady Di lookalike paraded round promoting bargains such as Matchbox Race and Chase (£29.99), John Bull Beer Kits (£1.99) and the Bontempi B225 organ (£199.95). In 1982, the ads boasted an Alice in Wonderland theme, with John Inman as the March Hare, while Tweedledum and Tweedledee, AKA Clegg and Compo off of Last of the Summer Wine, duelled over Galaxy Twinvader (£24.99, batteries extra), King of Hearts Windsor Davies looked impressed at his Bostik Glue Gun (£9.95) and Kid Jensen dressed up as a giant playing card to endorse Sony blank tapes (£2.49). The following year Joe Brown rolled up as the top-hatted ringmaster of, ‘the latest, greatest, ever more spectacular Woolworths Christmas show!’ DLT parped a trombone and promoted Price Blitz records, although the rationale behind hiring Lennie Bennett to dress up as a strongman to extol the virtues of the Old Spice Gift Set remains unclear to this day. But that’s the wonder of Woolies!