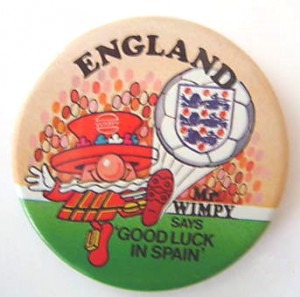 A child of that weird part of the 1950s when Britain was obsessed with all things American but, in trying to slavishly replicate US culture, ended up with something more tyically British than ever by accident. Hence Cliff Richard, hence the Austin Princess, and hence the Wimpy bar. Strangely named after a fat, dishonest mate of Popeye, the Wimpy bar began life as a little nugget of American fast food vending within that most British of instituons, the Lyons Corner House. They got the whole ‘burger in a bap’ concept, but fatally added such unmistakably Imperial elements as waitress service, cutlery, their own patented beefy brunch bender and Brown Derby dessert, and jaundiced cartoon beefeater mascot Mr Wimpy, as impersonated by many a cash-strapped teenager reluctantly trudging up the High Street in a big sweaty costume. Rumours that the whole enterprise was concocted by MacDonalds all along to make their own salty invasion seem like a blessed relief remain the stuff of sesame-seeded rumour.