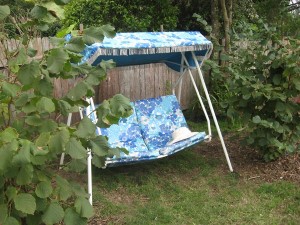 Gardening in the 1970s was all about bringing the indoors outdoors. Inspired by jaunts to exotic (ie mainly dry) foreign climes, suburban stay-at-homes sought to replicate that carefree sense of sunlit spaciousness by turning their back garden into an extra front room.

Sadly the great British sky had other ideas, and no symbol of this brave new herbacious internationalism suffered more at the hands of our sarcastic climate than the swingseat. It seemed like such a winner: goodbye to mossy benches, soggy linen deckchairs and those folding metal mantraps that did for Terry Scott on a weekly basis. Now you could bring your sofa outdoors, lounge on it in the blazing noonday sun while sipping a very tall drink through a very curly straw, and rock, rock, ROCK yourself onto a state of blissful unity with nature.

Inevitably, damp reality meant any moments of swinging relaxation were hard won. Those lovely, floppy, comfy, betasselled cushions didn’t come cheap, so the gently oscillating sun worshipper was always minded to keep one eye open, scanning the horizon for signs of the approaching cloud bank, lest a freak downpour reduce their deep-pile polyester snugness to a sodden, shapeless, mould incubating mass. The first raindrop on the end of the nose triggered a lightning reflex action to leave any passing SAS officers gaping in awe. The recumbent guardian of the seat transformed instantly into a mobile mound of orange and brown foam, capering wildly towards the garage like Lichtenstein’s contender in a Quatermass-themed round of Jeux Sans Frontieres.

The cushions may have been rescued, but the frame was doomed to stay out there, slowly turning from bright white to a rust-mottled desert camouflage, which would have matched the cushions perfectly if that one weekend of nice weather hadn’t faded the buggers to a delicate shade of pink. Let’s face it, nice soft cushions belong firmly under a roof. Perhaps the best way to experience the swingseat was by snatching a quick forty winks on the demonstration model on the homes and gardens floor of a big branch of Woolworths, gazing idly across the thirty square feet of butcher’s grass dotted with examples of Qualcast’s finest, until the security man yells at you to clear off out of it. That’s your British indoor garden paradise, right there.