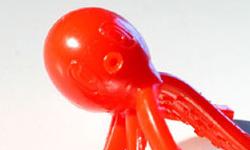 RAW LIVER-ishly replusive to the touch and prone to attracting huge quantities of fluff from eight miles away they may have been, yet the strange invention of Dr Ken Hakuta became a short-lived early eighties playground sensation like few before or since. The long and short of it was that if these worryingly over-adhesive arachnidy cephalopods were affixed to the upper portion of a smooth glass surface, they would gradually roll down in a condensatory motion, before reaching the bottom and plummeting off into, you guessed it, yet more fluff. Their popularity was, however, terminally dented by rapid outlawing from the vicinity all self-respecting schools, due to their capacity for lesson-disruption and, in rare instances, failed experiments in seeing if they would also roll down an unwilling participant’s spectacles.