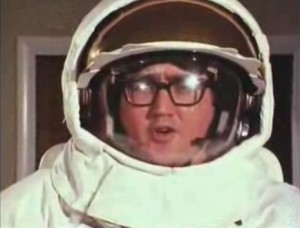 The manned exploration of space is the zenith of human technological endeavour, a stirring quest for knowledge and achievement that has the potential to reach beyond petty nationalist politics and unite the entire world. More importantly, it’s a great way for weary primary school teachers to shut noisy classes up with an afternoon of ‘project work’. Looking back it’s easy to view those mighty Saturn V launches as little more than elaborate entertainment, but back then such blasé derision for all things orbital was far from the norm. Hours of telly were devoted to serious discussions of plans for asteroid mines, doughnut-shaped space cities and the like. People truly believed a new era was just around the corner. Some time towards the end of the 1970s, however, it became clear to even the most wide-eyed space cadet that a planet obsessed with cuts, strikes and of course ‘prices’ was not likely to be setting foot upon any new worlds in the foreseeable future, and Cape Canaveral reluctantly settled into its new, more humble role of enabling Adam Ant to bore half the western world with ‘Vive Le Rock’ at Live Aid.