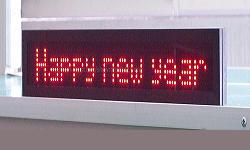 In the sixties they were a chilling vision of things to come, dispassionately pulsing out messages of doom whilst Michael Caine struggled to deactivate the timer on a ‘doomsday’ weapon. In the seventies, they were the absolute height of international global current affairs-related excitement, with news roundups getting much mileage out of ‘Mr Ford and the Japanese president watching the latest estimates being relayed on the outside of the complex’. By the early eighties, they were yesterday’s news, overtaken by digital display technology and reduced to novelty-sized novelty-purposed novelty items, snapped up at a now-affordable price by shopkeepers keen to add that extra bit of Tomorrow’s World-esque pizzaz to their shelves full of Daily Telegraphs and Gloy. The cunning conceit was that as well as proclaiming discounted prices to any passing potential shopper, they could also bring in a bit of extra revenue with regular punters forking out for a surprise personal message to be relayed to loved ones (“HAPPY BIRTHDAY MITZI!”). Unfortunately, freestanding keyboard-based operation made them prone both to ridiculous uncorrected spelling mistakes, and the mischief-making capacity of the more errant paperboys, resulting in the odd mild profanity appearing in red illuminated form. Within a couple of years, widely adjudged to be ‘a bit Metal Mickey’, they had all but disappeared.