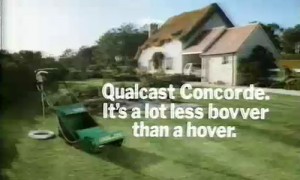 It’s widely acknowledged that, before regulations were relaxed a few years back, British adverts were unable to rubbish rival brands by name, hence all that ‘brand x/another leading washing up liquid/certain chargecards I could mention’ malarkey. Things came close to outright Coke/Pepsi-style hostilities, however, with the notorious Hover bovver campaign.

During the ’70s, Flymo had made a nice little earner with their range of go-ahead rotary orange grass trimmers, demonstrated by a ‘bevy of beauties’ in spangly jumpsuits, effortlessly trimming their verdant greensward with idle, sweeping strokes of floaty Flymo, gliding over paving stones without a care in the world. Come the early ’80s, Qualcast, manufacturers of sturdy, racing green British lawnmowers with good, trustworthy names like Concorde and Suffolk Punch, and sporting a traditional grass bucket, big heavy roller and two-stroke petrol engine that needs a good half dozen hefty tugs to start on a good day, felt this space-age garden maintenance (and from a bally Swedish company at that!) had gone far enough. An extensive, mildly humorous campaign was launched painting the trad option as the best one – “a lot less bovver than a hover”, indeed. (The rhyming tagline cheekily ripped off, and eventually outclassed, the enemy’s own “It’s easy when you know – Flymo”.)

The peak came with a commercial depicting an actress making a standard Flymo ad, then getting the put-upon film crew to fix the damage the ghastly hover had wrought on her lawn by trundling the trusty Qualcast out of the shed and doing it properly, with nice regimental stripes and no clippings strewn everywhere. Scholars of consumer history identify this war of words as the first knockings of the ’80s reactionary tendency to distrust all the shiny, plasticky trappings of modern life and fall back on reliably cosy tradition. Scholars of consumer history are to be avoided in public houses at all costs for precisely this reason.