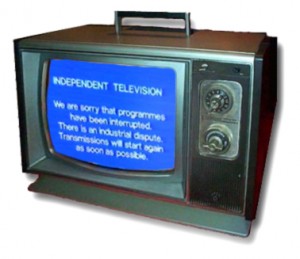 Classically cased in white plastic with a black dial for tuning in the picture and a hooped aerial that was maddeningly prone to losing the signal if anyone so much as looked at a power tool within a mile radius, the portable television set nevertheless opened up a new world of freedom for teens keen on sampling TV’s forbidden fruits. As a result, numerous episodes of The Young Ones were originally viewed in crackly black and white with the sound barely audible lest mum cottoned on to the unauthorised TV anarchy unfurling after lights out. The portable’s other benefit was to provide most households with their first real choice in viewing. So, while the parents did the 5.40pm current affairs courtesy of Nick Ross, Desmond Wilcox and the rest of the Sixty Minutes gang, the kids decamped upstairs with their beans on toast for some Peter Purves-endorsed bunny-hopping in Kick Start.