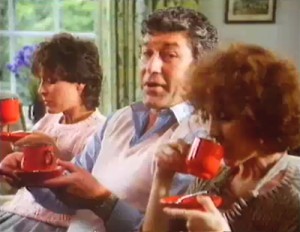 The campaign that begat a National Gesture, the mid-1980s Nescafé‭ ‬adverts were a prime example of how to succeed in advertising without really trying.‭ ‬The premise was so-so: middle-of-the-road showbiz faces (Gareth Hunt and Una Stubbs at the core, augmented by the likes of Peter Davison and Diane Keen) relaxed in suburban splendour, discussing the product’s ‘special blend and roast’ and ‘richer, smoother flavour,’ while bizarrely producing handfuls of coffee beans from nowhere by shaking a clenched fist next to the ear. Such unpretentious advertising can only be cherished with hindsight, but who nowadays wouldn’t swap a multi-million-pound boreathon with surfers and horses for compact classics such as ‘Gareth’s Garden’ or the award-bypassing ‘Gareth’s Cups’? As the 1980s really kicked in, Nescafé‭ ‬decided to up the ante,‭ ‬and the annoying Gold Blend couple was born.‭ ‬The sexual speculation foisted on Gareth and co by topical gag merchants up and down the land was spelt out in clunking innuendo,‭ ‬and a happy era of innocence and sweaters ground to a halt.‭ H‬owever, in 1989, Richard Briers and Penelope Wilton performed an ‘ironic’ postscript, showing the sainted Dickie rehearsing for a Hunt-style commercial, only for Penny to leap in with ‘the gesture‘. ‘I wanted to do that bit!’ moaned Briers, childishly. So did we all, Mr B.