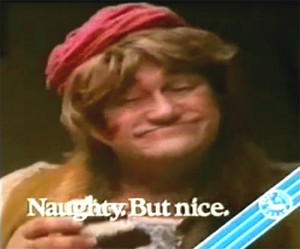 While Mr Kipling ran its sedate, well-mannered commercials for decades, boringly recounting scenes not seen in normal households for centuries, Lyons decided that a more modern approach was required. The basic theme of the ‘Naughty… but Nice’ campaign was that, yeah, the cakes might have loads of sugar and cream in them that may be bad for your figure, but who cared when they tasted as good as this? This devilish assertion was backed up by a roster of celebs, from Les Dawson in drag to Barbara Windsor, via Kenneth Williams in, improbably enough, Dracula mode. (‘Ere! The trouble with these midnight snacks is you get crumbs all over the bed!’) The slogan is said to be the creation of Salman Rushdie, trying to raise a few bob to write novels by working as a copywriter. Perhaps if he’d stuck to writing about cream cakes then he wouldn’t have had so much hassle in later years. In fact Rushdie is not alone in taking the commercial shilling over the years – legendary sports commentator Murray Walker may have been well-known for his garbled English, but in a previous career he’d informed the nation that Opal Fruits were ‘made to make your mouth water’.