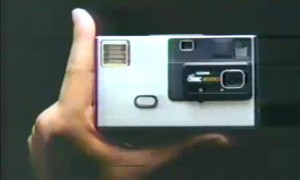 Those clunky, boxy old Instamatic cameras, eh? All so very ’70s. But now it’s the ’80s, the decade when the future finally arrives in a blaze of synthesised soya-slurping glory, and here come Kodak with the ultra-slinky Disc camera! No more those bulky black and orange binocular-shaped film cartridges – this slimline, sleek little device uses a thin and sexy disc of film, enabling you to take not quite as many pictures of substantially poorer quality with a… what’s that? Er, oh yes, admittedly the sexy minaturisation process means the film size is reduced to little over a centimeter across, with the result that the pictures you get back from Boots are grainier than the most antiquated box brownie, but, er, never mind that, look how slim and sleek and slinky it is! It’s like something out of James Bond! And here’s Peter Bowles doing the telly adverts, emphasising the suave, debonair way it can fit into the breast pocket of a sports jacket without spoiling the line. No, you’re right, at no point does he show an actual picture that’s been taken with one of the blasted things, but, er…

[Point of consumerist order: In the UK at least, the heyday of the Disc camera was around 1986, when Polaroid sued Kodak’s arse off for ripping off their patent instant film process, and the guilty party had to shamefacedly contact everyone who’d recently bought one of the offending cameras, informing them that they’d be useless from now on, but offering to do a gratis swapsie with them for… you guessed it, a sleek ‘n’ slimline Disc camera. So it’s a good bet that the majority of these benighted snappers were forced upon folk against their will, rather than actively sought out. By the end of the century, they too would be bound for the big Jessop’s in the sky.]