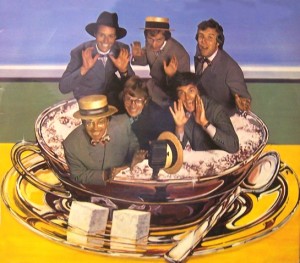 This vocal sextet, formed by a bunch of like-minded choral scholars from King’s College, Cambridge, has been on the go since 1969, but it’s imperial phase was undoubtedly from the mid-’70s to the early ’80s, when their ‘impeccably manicured vocal blend’ was, quite simply, everywhere. There was the traditional Carols from Kings on Christmas eve night. There were the amusingly plummy a capella covers of Good Vibrations and Life on Mars. There were guest spots with Ronnie Corbett, Nana Mouskouri and the Royal Variety Performance. There were ads for De Kuyper cherry brandy. There was The Frog Chorus. And of course, there was the vesper-like cathedral chant instructing us to retune our radios to receive the BBC frequencies which ‘will be chang-ed at this time’. Amazingly given all this activity, there have only been twenty members in forty years.