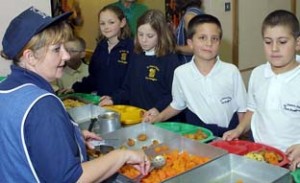 The 1970s was the decade when, in many cases, what was previously only science fiction became science. (Or, if you were an especially dim journalistic bulb, ‘science fact’. Well, it sounds punchier, doesn’t it? Like saying ‘Dad’s Army telly’ or ‘football sport’.) Inevitably, as soon as those utopian schemes leapt from the pages of Boys Own annuals into society at large, they started looking a bit less ‘gee whiz’ and a bit more ‘ooh, Christ!’ Computers went from debonair robot butlers and all-knowing superbrains to being ominous causes of mass unemployment and ‘that thing from the council that chewed up your rates rebate’ in seconds. Likewise, a future spent merrily munching on soya products instead of nasty old Stone Age stuff like beef and chicken seemed a tad less appetising once various textile – yes, textile -businesses, with the blessing of windmilling nutritionist Magnus Pyke, actually started churning the stuff out. Fabric merchants Courtauld’s knitted strands of amino acids together like they were so much polyester to form Courtauld’s Edible Spun Protein, or ‘Kesp’, which went on the supermarket shelves and sold like… well, like signed photos of Reginald Maudling, to be honest. Undeterred, Courtauld’s – allegedly – did a deal with the government of the time and off-loaded a consignment of the unloved un-food into the nation’s school dinners. If this ever did happen, the offending stuff was probably got through in a matter of months, but the rumour persisted for a good decade afterwards that the mince in that rectangular slice of minced beef pie was something not of this world, when in reality it was a perfectly natural lump of inedible gristle.