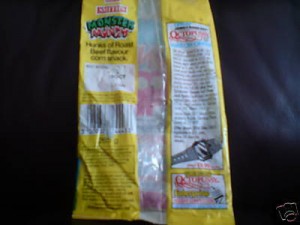 From the KP Snaps Swimming Bag to the ‘Roller Radio’ (whatever that was exactly), promotional giveaways involving the accruement of a specified quantity of empty crips packets were a proto-recycling regular occurrence in the early eighties. Thus it was that in 1983, Smiths Crisps attempted to surf a wave of James Bond hysteria in the wake of the release of Octopussy by giving away cheap flimsy digital watches with two important differences – that familiar ‘007’ logo rendered in a sort of crumbly off-yellow hue, and the ability to ‘beep’ a flat, tuneless, unrecognisable and (thanks to cost-cutting technology) virtually unstoppable rendition of the John Barry/Monty Norman/Delete Where Legally Acceptable franchise signature tune at a digitally predetermined time, only with an additional extraneous non-canon ‘beep’ at the end for no readily obvious reason. And surf that wave they certainly did – for a couple of months, playgrounds were uttertly swamped with youngsters proudly toting their Roger Moore-slanted time-telling acquisitions, leading to a teacher-infuriating cacophony of twenty three slightly-out-of-sync watch-generated Bond Themes sounding whenever the end of a lesson approached. Mercifully, so carefully tailored to the film’s theatrical lifespan were they that within a short while, failing components reduced the once-proud guitar-aping fanfare to a sort of dejected buzz, and the watches were ditched even faster than George Lazenby.

Related Items:"hahahahaha there's nothing you can do to stop my watch alarm going off Mr Bond!", A James Bond style agent with a 'funny' secret service number, Bond as he ought to be - silly, James Bond, John Barry, Roger Moore, Smiths Crisps
Share
Tweet
Share
Share
Email