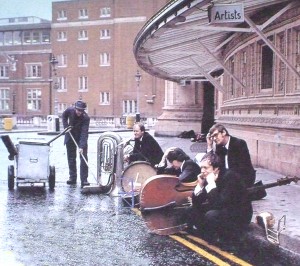 Unapologetic graduates of the straw boater/starched spats school of wordplay and whimsy, scarce indeed was the light-hearted magazine programme of the 1970s and 1980s that didn’t call upon capricious ensemble Instant Sunshine to supply a full stop to a line-up of topical chat, consumer watchdoggery and cut-price cuisine. Erstwhile medical students Alan Maryon-Davis, David Barlow and Peter Christie had swapped their lab coats for blazers in the late 1960s, moving swiftly from college hops to the Edinburgh Fringe to cabaret supremacy. With Christie penning the tunes and new recruit Miles ‘Franglais’ Kington wielding double bass, the tantalising prospect of not one but four Richard Stilgoe’s waxing wry about everything from government subsidy (‘We’re awfully keen on the Arts’) to liturgical controversy (‘Who mowed the lawns of Eden?’) to package holidays (‘Los Peckham Ryos’) became a reality. They were covered by the King’s Singers. They were permanent fixtures in the grubby foyer of Pebble Mill at One. Their appeal spanned the ages from kids on Jackanory – semi-musical tales including ‘The Search for the Source of the M1’ – to remuneratively-challenged pensioners listening to Radio 4 (‘Financial review is long overdue/don’t let money stew – with profit in view/what you must do is tune to Money Box’). They were regulars on Robert Robinson’s Stop the Week for decades, slipped effortlessly between the world’s cocktail lounges and literary festivals, and outgunned and outpunned rival harmonisers Harvey and the Wallbangers ten to one. Side projects, including Alan’s stint climbing in and out of giant polystyrene capillaries on BBC1’s Bodymatters, failed to derail the ‘Sunshine’s state, though Miles eventually buggered off to do more newspaper columns about funny foreign accents. Thankfully they’re still going strong today, with David’s son Peter now on bass and the repertoire bolstered by ice-cube chinking winners like ‘Don’t tell the Abbot’, ‘Cucumber Sandwiches’ and ‘Conservation Conversation’. Scat’s the way to do it.