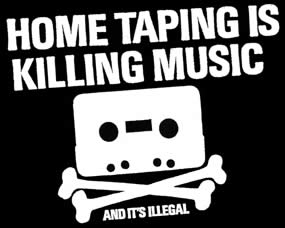 Nowadays your recordable DVDs and iPods allow you to store your favourite music and TV in whatever format you want. However in the pre-VHS era, if you wanted to enjoy your favourite TV show again, you either had to invest in a bulky, expensive reel-to-reel video recorder, or, rather easier, hold the microphone from your tape recorder to the telly speaker and make an audio recording. Inevitably you’d hear your sister shrieking in the background, but given the theme to Windmill was unlikely to make it onto seven inch, this was as good as it got. Similarly, if you couldn’t afford to buy your favourite current singles, Sunday teatimes would see you crouched over the radio, taping what you wanted off the Top Forty on Radio One. Inevitably this meant keeping your finger over the stop button, desperate to avoid getting any of the DJ’s voice on the tape – adding that extra sheen of professionalism. As any Musicians’ Union member would tell you, recording such copyrighted material was illegal, and clearly not to be encouraged. However in later years, the BBC managed to retrieve a substantial amount of stuff no longer in the archives, thanks to a home-taping amnesty. Sadly there was no call for low-quality copies of Shakin’ Stevens singles drowned out by your mum shouting you down for your tea.