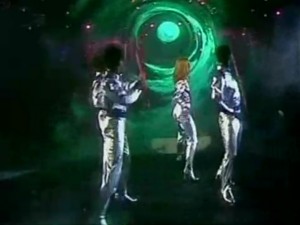 Hey, science can be sexy, too! And the nightclub of the future wouldn’t be complete without a cloud of dry ice through which a flickering blue laser is shone, giving a sort of fluorescent ‘cloud tunnel effect which is rather impressive for about ten seconds after you see it, then hopelessly tacky for ever after. Naturally, Peter Stringfellow bought a dozen, and leftovers found their way into the special effects of rubbish time-travelling aircraft carrier saga The Final Countdown, posh kids’ sci-fi drama Chocky and hopeless summer morning ‘space quiz’ Starstrider.