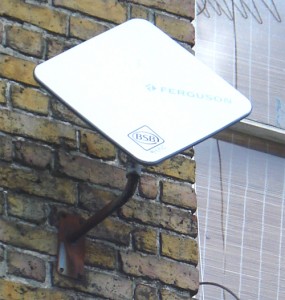 Satellite telly in Britain has been around since 1978, however Sky Channel broadcasting Australian Rules football and looped episodes of The Untouchables to a few enthusiasts with giant dishes in their back garden doesn’t really count.  The satellite age didn’t really kick-off here until 1989 when a Rupert Murdoch-injected Sky Television went head-to-head against BSB. The stark difference between the two services was perhaps best symbolised by their radically different satellite dish designs: Sky’s was an ugly, wire-meshy, nobbly affair made by the bloke who ran Amstrad, whereas the BSB squarial was of a majestic white, adhering to that aesthetic so beloved of home make-over programmes – clean, sleek lines. Undoubtedly the squarial was the more elegant of the two but whose carried the most popular service? Well BSB offered state-of-the art D-MAC satellite technology and an eclectic mix of arts, sport and entertainment programming, but for those who chose Sky there was unlimited ALF, 21 Jump Street and The Price is Right .