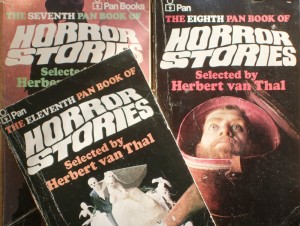 From 1958 onwards, paperback house Pan published a regular anthology of short stories of the macabre: spine-chilling tales of uncanny terror, subtle beastliness, eldritch nightmare, Grand Guignol and other adjectives only ever used to describe fruity horror of a certain vintage.  For three generations of children, it was a grisly winner. The stories, ranging from a couple of pages to several chapters, were selected by the perfectly-named Herbert van Thal, who beckoned the reader in with foreboding entreaties on the back cover: ‘We feel that the stories in this book are such that if your nerves are not of the strongest, then it is wise to read them in daylight.’ Or, Mr van Thal neglected to add, retold in school playgrounds with added wide-eyed spooky mugging and judiciously placed ‘mwah-ha-ha-haaaa!’s by ‘flamboyant’ pre-teen boys the nation over. The oral tradition of storytelling was well-served by these tatty black paperbacks.

Many of the tales were disturbing indeed.  Favourite subjects were grotesque creatures found in eerily empty Edwardian houses, brilliant surgeons taking revenge on unfaithful lovers as only they knew how, immobilised men being slowly devoured by swarms of rats, and best of all, lovingly-described scenes of methodical dismemberment, preferably carried out by innocent young children.  The writing was often of a high calibre – as well as genre stalwarts such as R Chetwynd-Hayes and Nigel Kneale, the likes of Patricia Highsmith, Muriel Spark, and even John Lennon contributed unholy offerings of nameless dread to leave sleep cowering in the halls of terror.

With their distinctive covers depicting the remains of some unfortunate victim, and their ghostly wobbly font, the books provided the ideal literary counterpart to spooky TV programmes like Armchair Thriller and Hammer House of Horror.  With the advent of the video nasty, however, the spooky schoolboy samizdat network which had kept the books in such good business moved on to more graphic prurient kicks, and the anthology’s popularity started to wane. After van Thal’s death in 1983 the series limped on with derivative unpleasantness largely written by hacks (oh, and Stephen King), before finally resting in peace in 1988.