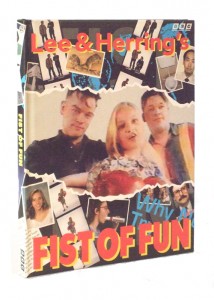 Last chance for a half-decent TV comedy book before Mitchell and Webb! Stewart Lee and Richard Herring’s debut TV series was deceptively ramshackle in appearance, but with plenty of finely-wrought comedy under the Tipp-Ex-stained bonnet – a self-reflexive and self-deprecating take on the age-old “Why Don’t You..? as presented by terminally hip perpetual student and pathologically unworldly West Country pervert” chestnut. In essence, they were you and your mate riffing into a tape recorder about the secret life of Steve Priestley while wondering where all the girls had gone. Only funny. Throw in Peter Baynham’s tragic Welsh manchild with a life bypass and you had the de facto comedy mascots of the Britpop years, as Vic Reeves was to baggy or Chris Morris to, er, whatever people listened to in 1997.

No surprise, then, that the paper spin-off, lovingly modelled on the classical architecture of its Python and Goodies predecessors, was worth the £8.99 price tag in a way that contemporary efforts by The Mary Whitehouse Experience and Father Ted weren’t. Ice T, Patrick Marber, Tony Parsons and The Fall loomed large. A page of Nelson’s Column-style fag packet BBC sitcom concepts struck comedy gold with the contrived likes of Otherfoot’s Shoe and Myy Cup Upstairs. Cornish curmudgeons were excoriated, mediocrity and Ians of all stripes celebrated, and gratuitous mentions of Leee’s Place and Gaz Top Non Stop helped future generations date its provenance precisely. (Although if we’re being pernickety, the rather flat “Adobe – the Early Years” graphic design’s a pretty big clue as well.)

There was, inevitably, controversy. A routine about Brian Keenan was nixed at the copy editing stage on legal advice,  but Simon Quinlank’s jauntily blasphemous Christian Church Crawl hobby (“So far I have eaten seven whole Jesuses plus one of Jesus’s legs!”) oddly wasn’t, despite being denied an airing on TV. There was even a pisstake of Nigel Rees’s Graffiti books, tipping the nod to decades-old toilet book tradition. Only Adam and Joe came close to such a sustained comic effort in the ensuing years (with a similar DIY aesthetic), while everyone else just punted out a DVD with a few drunken commentaries tacked on the end. The idiots.