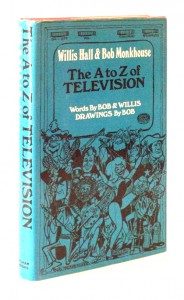 The talents of Bob Monkhouse – are we even close to totting them up? This comedy gazetteer of the state of the cathode ray arts at the start of the seventies, co-authored by the Reverend Robert with playwright Willis Hall, demonstrates at least three of them – the gag machine, the accomplished comic illustrator (all the crisply-drawn cartoons, pitched somewhere between big nosed Punch austerity and Cheeky Weekly exuberance, emanate from the Monkhouse pen) and, of course, his encyclopaedic knowledge and love of the goggle box.

An easy stocking filler of cheap gags about cigar-chomping producers, histrionic actors and inedible canteen rissoles, you might expect. Well, yes. But there’s much more, as Bob’s not afraid to get technical, both about life in front of the cameras (see ‘Cod Dry’, a detailed exploration of the art of fake corpsing), behind the cameras (there’s a breakdown of floor managerial gestures, an expert nailing of the similarity of early TV sci-fi scripts to TV western scripts, and a comparison of the relative merits of the clapometer and the all-new decibel-measuring digitometer) and even behind the screen (the vagaries of the vertical hold, and ‘what to do if your telly blows up’).

This, needless to say, is a book close to TV Cream’s collective heart. Sometimes spookily so. Try this piece on (pre-Tiswas) Saturday morning telly:

“Do not despise Saturday morning watching. You are quite likely to pick up, unheralded, a programme in Pakistani, or a short film urging you to join the Parachute Regiment, or a colourful travelogue concerning the Greek islands, or an interesting featurette about the spawning habits of salmon, or simple straightforward instruction in kerb drill. One of the authors prizes most highly a live programme he caught, purely by chance, one wet Saturday morning, devoted to a bevy of bards being crowned at an eisteddfod. Students of British weather variations might find it interesting to make note that while it was puring down in buckets at the author’s home in St Albans, in Llandudno the skies were bright and clear and it was so hot that many of the ladies in Welsh national costume had removed their tall hats. You can pick up lots of useful information such as this on any Saturday morning and it will further your education no end.”

We wish we’d written that.

Perhaps most presciently of all, the book’s musings on the sub-Hollywood nature of Grandaland’s tourist attraction ambitions ends: “The tourists may not yet be flocking to Grandaland in thousands, but given time – say ten more years of Coronation Street – and we could see the foundations laid for the Granadaland Hilton Hotel.” Well, it took a bit longer than that, and the Granada management went for “Victoria and Albert” as the moniker of choice, but it happened.

And, since you ask, Z is for ‘Zounds’: “an inoffensive expletive much favoured by upright children’s historical adventure series”.