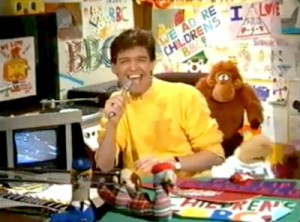 At last, the true story behind a much celebrated chapter in British Television can now be told.

Exclusive to TV Cream (and anyone else who’s ever had a drink with Jill Phythian) this is the story of how come, in 1987, Phillip Schofield sang the theme song to [cref 996 ULYSSES 31].

Jill takes up the story… Jill?

“Yes, the whole singing-along-to-Ulysses-31 thing was in fact started by me.

“Me and my friend Joanne wrote in to the Broom Cupboard, saying we’d started a Ulysses 31 fan club (we hadn’t really, but we did talk about it a lot when we were sitting next to each other in Biology, which sort of counts). We sent Phillip S a badge and membership card, and said in the covering letter that it was a membership requirement to sing along with the theme tune every week.

“Phil read the letter out on air, wore the badge (which was crappy and cardboard and had No-No drawn on it), and I was ecstatic, of course. THEN when U31 actually started, he just sang the theme tune over the top of it, without fanfare, for the first time. My cup of teenage happiness was full. The singing-along then became a Thing (TM), but I was and remain proud of having prodded it into existence.

“Needless to say, this moment has NOT surfaced on YouTube but I vaguely hope that some day it might.

“BTW, the fan club was called U.T.E.N.S.I.L.S., which stood for Ulysses Thirty-one, (Especially No-No) Slightly Insane Lunatics Society. Please bear in mind that I was 14 or something. Anyway, Phil really liked that and for several subsequent weeks he kept mentioning it (‘And coming up later is Ulysses 31 for all you U.T.E.N.S.I.L.S. out there…’) which I was deliriously thrilled about.”

So there you have it. And before we leave you with the fruits of Jill’s efforts, some talking points:

1) Have you ever affected the content of a TV show? Tell us how below.
2) Does someone out there have a video recording of Phil reading out Jill’s letter?
3) And, Jill, what chance of us getting a U.T.E.N.S.I.L.S membership, plus badge… or at least a recreation of one we can proudly display beside TVC’s logo?