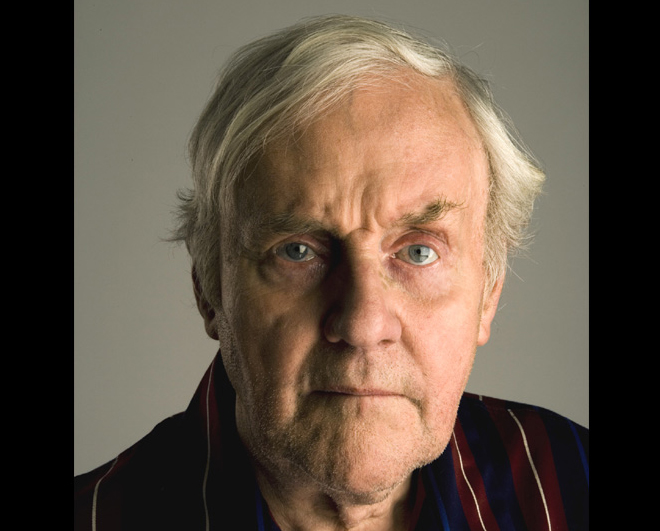 The great Richard Briers has passed away at the age of 79.

Eight years ago (give or take) we were lucky enough to chat to him about bringing back Roobarb for Channel 5’s Roobarb and Custard Too. Here’s some of the things he had to say…

ON VOICEOVER WORK: Oh yes – it pays well and it’s very quick. I love it. I’ll voice anything – I always have. Well, as long as it wasn’t something horrible. You have to be a bit careful. If your image is of somebody who’s amusing and all your shows are clean, you’ve got to be a little bit careful. I always get the scripts to look at, and if they’re tasteless or there’s bad language in it, then I can’t do it.

BEING A PART OF CHILDREN’S TV AFTER ALL THESE YEARS: I’m sort of an Uncle Mac. Uncle Dick! [Laughs] I love doing kids’ stuff, always have done. I’ve recently done Big Toe Little Toe on Radio 7. Reading kids’ stories for them. So I’m still doing all that kids’ stuff, which is nice – I’ve always liked doing it.

THINGS YOU’D REVISIT: Oh no, no, I wouldn’t revisit something like The Good Life – that’s them done and dusted.

WINDING DOWN HIS CAREER: Short jobs. This is the thing now. I’ve stopped touring and I’ve stopped West End plays so I’m not locked in. It means I can do work two days a week. Great. That keeps the business ticking over, really. Until I fall down I shall keeping doing something. And, of course, sound work is lovely, because you haven’t got the stress of not remembering your lines and things like that. They’re nice jobs to have.

HIS GIFT FOR COMEDY: It’s an instinctive thing. It’s a lovely gift, like any gift. It’s mainly… it’s a very narrow gift. I’m very, very, very good at reacting. In Ever Decreasing Circles with Peter Egan it was a good double-act. He’s good-looking and very tall, and I’m playing a ratty little man. The reactions of this very super sensitive little man against this… he sent me up rotten, and I didn’t know or understand – and that makes me laugh. I think my strength is reacting to somebody else.

WORKING ACROSS COMEDY AND DRAMA: I was always in rep, when I first started, I was always a ‘useful’ actor, playing 70-year-olds or something – and I’m now 70 – and I’d do croaky little voices and things like that. Always did the voices. So I was called a very ‘useful’ actor because I could do very different parts. And I kept that going, really. I thought, ‘Well, how far can I get?’ Not in terms of success that way, but in width. Expanding ones talents. And Ken Branagh arrived by miracle and, you know, I ended up going around the world playing King Lear for God’s sake. It nearly killed me. But, from Roobarb to Lear is a lovely range, you can’t say I’m insular. The good thing about Roobarb is I haven’t got to grow a beard for it, which is fine.

BEING STUCK IN COMEDY AFTER THE GOOD LIFE: I was stuck as a comedy man. The boys who wrote The Good Life wrote Ever Decreasing and gave me a character part, which was brilliant. Because with Tom Good I had to use my own personality for him, but Martin was a wonderful character – I never got typecast. Very lucky. Ever Decreasing Circles seems to be slightly overshadowed by The Good Life. They won’t put it on – I don’t know why they never put it on. There’s almost too many repeats of The Good Life, in a funny way. However good a show is, you can have too much of it. But they don’t seem to put Circles on. They put it out sometime in the afternoon about five or six years ago. That was all. Because it’s a very funny show. And a lovely team.

MARTIN BRYCE: He was a very irritating man. [Laughs] Maybe that’s it! Maybe that’s why they don’t put it on anymore – they can’t stand the little bastard. I find him very amusing, and of course it was nice to play somebody who wasn’t me – or parts of me. So that was good and, as I say, Penelope Wilton, Peter Egan and the neighbours. It was a very strong first 11 team that one. Well, The Good Life was a wonderful team as well. It’s all team shows, not just one person.

THEATRE: I’m not going to do anymore. Well, I might do a little tiny bit – I don’t know. I’ve been so lucky… But I’m 71, and I want to have fun. Why the hell do something which could frighten me to death, or I possibly couldn’t do? I just have a nice time.

LIVING IN CHISWICK: It’s too late to move now, really. All the children have grown-up there. You could swap a palace in Devon for a semi-detached in Chiswick, but then you’d go out of your mind, the bottles start coming out and then you’ve had it.

BEING MARRIED FOR OVER 40 YEARS: Well, you only hear about the planes that crash. A lot of people we’ve known for 40 years are still married. I think a lot of the problem is if you’re very, very good looking and you get into films and go off in a jet away from home. Then you’re with other people who are equally handsome or good-looking, and that’s the danger. Luckily I wasn’t good-looking and I never left home, so I was all right [laughs].

THE WORK HE’D LIKE TO BE REMEMBERED FOR: Well, obviously there’s The Good Life , which will be remembered. I mean, the public hardly see you on the stage, only 2,000 people might catch you in the theatre, but there was 18 million for The Good Life. One of the best performances I ever gave was Malvolio in Twelfth Night, directed by Kenneth Branagh. And that’s been my sort of favourite part in the classics.

STILL BEING ASSOCIATED WITH TOM GOOD: I don’t mind. It was such a marvellous, successful show and it made the difference for the four of us. I mean, Paul Eddington died, but it made his life. He was quite broke and had three children and if he’d been an ordinary actor, he’d have been struggling for money. And that made him. Afterwards he got Yes Minister and so on. So that sort of thing you can’t measure in gratitude in a way. And we didn’t do that many. I think if you become entrapped in something then you’re thinking, ‘Oh, drat, I should have got out of that’. But on The Good Life, the writers said, after 30 shows, ‘Look we’re really sorry, we just can’t get any more ideas’. I said, ‘Look, I don’t want you to write when you don’t want to write’. The whole point was that they loved their material and they respected their talent. And out of 29 shows, you probably got 24 really good ones. If they’d gone on, down it goes. They always do. Nowadays, they make 75 shows and you think, ‘Oh dear, it’s a bit dangerous’.

AMBITIONS?: None. I think Roobarb and Custard to King Lear is a good range. I wouldn’t give it back.