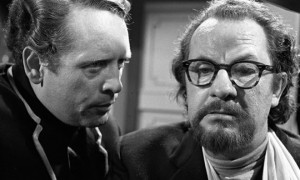 One thing that TV Cream has been waiting for almost as long as the release of Let It Be on DVD is a decent book about The Prisoner.

By decent we mean one that is actually readable. Not one that comprises 14 essays each arguing for a different episode transmission order. Not one that is full of lofty analysis seeking to place the show within different and usually mutually opposing schools of philosophy.

And not one that has been stitched together in magpie fashion from back issues of the Six of One fanclub magazine.

No, it has to be one that boasts a laudable amount of new research, one preferably with some interviews, stuff about the production history and ideally some archivery from the time it was first broadcast, but above all one you don’t have to work hard at to get something out of.

Such a book, as far as TV Cream is aware, does not exist. You’d think, over 40 years on, it really should have been done. Perhaps it’s too late anyway, seeing as how so many of the protagonists are now dead.

Andrew Pixley put together liner notes so vast they had to be turned into a book for the Network DVD re-issue the other year. He came close, but not close enough. His is an exhaustively-annotated read, but it is also exhausting.

This isn’t to knock Pixley’s fondness for detail and for quoting from dozens and dozens of source materials (TV Cream is surely the last to claim an authority in either of those fields). It’s more to do with the way he never quite conveys the sheer excitement and intelligence alive in the heart of The Prisoner.

Reading Pixley’s notes is like having to learn about, as Sir Humphrey would say, an inception of a new cataloguing system in the head office of the Driver and Vehicle Licensing Agency that goes utterly and uninterestingly according to plan, not the story of something that is profoundly thrilling and fun.

So the wait goes on.

As Bob Monkhouse would say, the best bit comes at 3 minutes, 42 seconds.