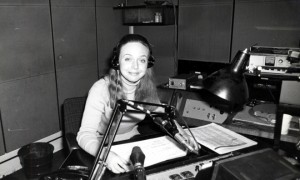 Radio 2’s resident Old Mrs Clutterbritches has finally been prised free from the slot to which she has clung like a petulant barnacle for 17 years.

A few years ago TV Cream compiled an inventory of Ms Kennedy’s idiosyncrasies, which for some make her one of the best broadcasters in the UK, but which for the other 99.999999999999999% of the population confirm her as one the most objectionable DJs ever to grace the airwaves.

So just before we all get to see the back of Bunty Bagshaw, which will at least be marginally more preferable than her front, here’s the updated Sarah Kennedy Casebook.

1) VAUXHALL CROSS
For many years Sarah has lived a three-minute walk away from her studio, but has chosen to drive into work because there is a road between her flat and Broadcasting House. Her journey has involved navigating a busy intersection of London called Vauxhall Cross, a junction that has no interest or relevance to a good nine-tenths of the population, but because she gets stuck in traffic jams that she preposterously claim last “up to four hours – it’s a total violation of my civil liberties”, she has been only too ready to drone on about it joylessly every single bloody morning without fail.

2) “THE MUCH BELOVED”
Aka Mr Sarah Kennedy. Though he has been talked about incessantly his real name has never, to our knowledge, been revealed. Thanks to Sarah’s frequent outbursts of indiscretion, however, it’s been possible to ascertain a) he seems to be about 30 years younger than his wife, b) he is obsessed with ultra-macho adventure sports and, worse of all, c) he wears Y-fronts with holes in which are over two decades old. There was also a rather grisly incident a few years ago when, suffering from some kind of eye infection that had left him – as far as you could tell from the garbled explanation – half blind, the suffering of “The Much Beloved” was prolonged for another two weeks when Sarah accidentally smashed the only bottle of eye drops they had in the house.

3) “BUNTY BAGSHAW”
Sarah’s nickname. Which she coined herself.

4) JINGLES
There never were any. Sarah never liked any of the standard Radio 2 jingles with her name on them, so she rather arrogantly made a point of not playing them, then talked about not playing them, all the while neglecting to say what the show was or the station to which you were tuned, making it even more likely – and dangerous – of finding yourself listening in to her programme and not realising it.

5) THE DAILY MAIL
It was of no real surprise to discover this was Sarah’s newspaper of choice, though her patronage of Associated’s TV Cream-baiting light-fingered nemesis can and did reach astronomical proportions. There was always room for something from the letters page, even if both the news and Wogan, Walker, Evans or whoever were waiting to begin. As for the paper “review” (traditionally at 6.50am), headlines and stories appeared to be selected only if they chimed in with Sarah’s pronounced opinions (see below), while everything else was dismissed as “daft” or “really, really, frightening.” She also had an irritating tendency to say “well, that story is being covered in the news bulletin so I won’t mention it”, thereby removing the entire point of a paper review in the first place. Suffice to say that said reviews, to all intents and purpose, always sounded like they’ve been prepared “in a bit of a rush”.

6) PEDANTRY
Sarah once played the sublime ‘Never Let Her Slip Away’, and every time the title was mentioned in the lyrics she interrupted the song to shout out “Split infinitive!” There has never been a more infuriating three minutes of radio broadcasting in the history of this country.

7) SOUND EFFECTS
Like a snotty nine-year-old who’s just discovered a button on their school music room Casio keyboard which when pressed makes a sound like a fart through a megaphone, Sarah’s fondness for her sound effects tape was unflinching. If a reader had written in about their pet cat, in a flash the airwaves would be filled, not with gentle purring of a kind to rouse you from your sleep, but a din of screeching that Sarah then pretended to “talk” to, like a simpleton. A crowing cockerel announced the arrival of the seven o’clock news, because obviously the sound of the pips was too confusing for listeners. The best chance to hear the full works, however, came during the…

8) TRAVEL NEWS
This was clearly Sarah’s favourite part of the entire show. How she loved obscuring important roadworks information with the deafening sound of a pneumatic drill – just the thing to wake you from a deep, peaceful slumber. Is that the sound of bagpipes? Why, there must be a traffic jam somewhere in Scotland. Meanwhile from 2000-2008 any hold-ups in Greater London were, of course, entirely the responsibility of “Mayor Ken – and he’ll get what’s coming to him.”

9) SARAH’S SOAPBOX
The amount of editorialising that went on during this show beggared belief. Other presenters, never mind producers, had been sacked for far less. Asylum seekers? “This island is full to bursting, there’s no more room.” Myra Hindley? “She’s where she belongs now – in hell.” The Countryside Alliance? “I’ve cleared all my spare bedrooms if anyone wants to stay over after the next march.” In truth what was most maddening was not so much the nature of the opinions she held (which she was perfectly entitled to) but the manner in which she expressed them: in public, relentlessly, and forever bordering on the slightly hysterical. The absolute limit was when she would carry on voicing her views while a decent record was playing. Shut up woman, there’s someone singing!

10) RACIALISM
Now we’re not saying Sarah Kennedy’s a racist, but she did once contend that black people made for good athletes because they were used to running away from lions, and on a different occasion asserted that black people were a problem because she couldn’t see them in the dark and had almost run over a black man in her car. “It’s lucky he opened his mouth to yawn or do something and I saw him.”

11) THE “LOVE HATE” SONG
Finally, the one slot in the show that used to be reasonably entertaining. This was back in the early noughties, where Sarah self-consciously played a novelty record nominated by listeners of the kind that you either, well, loved or hated. Stand-out offerings included ‘Shut That Door’ by Larry Grayson, ‘The Court Of King Caractacus’ by Rolf Harris and ‘Three Little Fishes’ by Frankie Howerd. Even here, though, Sarah could not help but ruin what was her one decent feature, which she did either by making bogus vomiting noises on-mike all the way through, or laughing like a drain all over it. And for a good fifteen minutes afterwards. And throughout the following morning’s show. Grrrr.