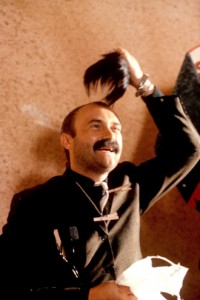 “Shush a minute. Where was I? Oh yeah, the fact I’ve announced me retirement – again.

“Seems it’s not enough for certain people to take my work at, hey hey, face value. Seems like certain people have to always put everything in lists and such like.

“Whatever. I know what I like… oh hang on, that was the bloke who I replaced. Sorry.

“But seriously, even if yer only like some of me stuff, that’s fine with me. I’m half-deaf and can’t play the flipping drums anymore, so who gives a toss.

“Anyway, in honour of me hanging’ up me drumsticks and tonsils for good (at least until the next retirement tour or unexpected tax bill), the boys here at TV Cream have come up with a list of me best ever songs. Well, a list of me least worst songs. Enjoy!

Behind The Lines (Face Value, 1981)
About the only solo thing Phil ever did where the drums didn’t sound like they’d been recorded through a dozen whoopee cushions. And boy, what a difference. The parping of the Earth Wind & Fire horns is superb, someone fannies about joyfully on the bass, and Phil even sounds like he’s thinking about what he’s singing instead of mouthing some words while mentally planning where to have dinner. Irony of ironies, it’s a cover. Of a Genesis song.

I Cannot Believe It’s True (Hello, I Must Be Going!, 1982)
Oh dear, Phil’s having love pains again. But this time he’s having them to a funky rhythm and a tune that only involves five notes. Result = a breezily singalongable slice of plastic soul.

Like China (Hello, I Must Be Going!, 1982)
Did we mention that Phil is a practising thespian? Step forward the cocker-nee charmer of this kitchen sink number, who thinks his girl is “just like a picture book”, and yet can’t work out why her mum and dad don’t like him, despite him straightening his tie and combing his hair. Plus her brother thinks Phil is a “limp-wristed wimp”. All of which adds up to the titular simile about a Far Eastern Communist state. Possibly.

Mad Man Moon (A Trick of the Tail, 1976)
Far and away the best Genesis album Phil leant his pipes to was the first one after Pete had buggered off. This eerie opus, replete with invocation to “roll on a muddy pitch in Newcastle”, just edges it over the LP’s other highlight, the guitar-washed strumathon Entangled.

Something Happened On The Way To Heaven (…But Seriously, 1989)
Classy pop, of the kind spun regularly and enthusiastically by Nicholas Andrew Argyll Campbell. That “dum dum” bit at the end of each instrumental break is still one of PC’s finest musical moments.

Take Me Home (No Jacket Required, 1985)
Phil has problems with some local pyromaniacs, but their efforts keep him warm, so he really doesn’t mind. One of those tracks that builds and builds before tipping over into a bludgeongly infectious chorus. Is that Peter Gabriel on backing vocals? Yes, yes it is. Now what’s this song about, Phil? “I don’t remember”.

Turn It On Again (Duke, 1980)
Try tapping your foot to this, pop-pickers. The time signature is 13/4. Yet it somehow works, even though it’s shameless arena-tickling bombast. “All I need is a TV show – that, and the radio.” That’s TV Cream’s raison d’etre, right there.

Who Said I Would (No Jacket Required, 1985)
The acme of the world-jetting drum machine-wielding Phil of the mid-80s, more so even than Sussudio. It’s all layered on thickly here; there’s even a vocoder. Only to be taken in small doses.

You Know What I Mean (Face Value, 1981)
If you must have one Phil Collins Soppy Ballad, make it this one: a pretty decent attempt at nailing that soon-to-be-trademark mix of winsome sentiments with wispish piano. It’s not very long, it’s not very loud. And give the man a break, his wife had just run off with a paint pot.