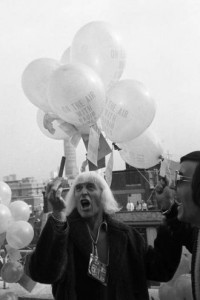 The nation’s once-favourite listings magazine has become so disinterested of late in actually telling you what’s on (witness the issue a couple of weeks ago featuring Justin Webb analysing US health care reform) that it’s increasingly easy to forget it was once a publication that cared just as much for programmes as people, if not more so.

By way of a corrective, here are seven quotes from the magazine’s imperial era.

They have, however, become conveniently separated from any clue as to the identity of the speaker.

Reader, can you name the people who, strange as it may seem nowadays, are appearing in Radio Times not to talk about politics or their desperately poor upbringing or what kind of wild animals they have roaming round their estate, but your actual television and radio shows?

2) “I’ve always had belief. Straight away I felt confident I knew what I was about and what I could do. But my confidence was a little bit knocked when suddenly people started saying: ‘D’you think you’d better get another partner?’ A bit patronising. ‘Have you found your partner yet?’ Like I’d lost my keys or something.”
(May 1988)

3) “We have the biggest and best team ever; and, for the first time, Radio 2 will share our communications facilities for a joint operation.”
(May 1986)

4) “The managers at these Mecca halls have worked very hard setting up the programmes. They’ve put all the efficient organisation behind them into raising the money.”
(October 1985)

5) “I left at 11 o’clock that night after the recording and there he was, sitting in his car, about to start up and go home. I sloped up and while I was chatting I put one of those road cones on his car. We said goodnight and he drove away; he didn’t notice a thing.”
(September 1983)

6) “The shame of it is that we haven’t time in a 40-minute programme to show the hysteria, the tension or the phone calls to say that supplies haven’t made it.”
(September 1989)

7) “He looked at me in the way a vegetarian surveys a slice of rare beef, and said mildly that it wouldn’t be quite the same. Being a weak woman, I suppose, I gave in. Although I did think that maybe I might wear a little label on it saying ‘I don’t approve of this either’.”
(June 1978)