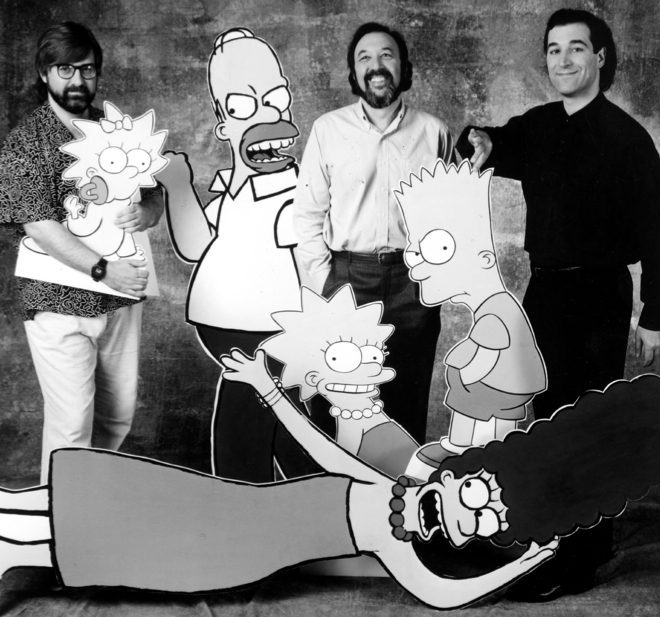 FIRST CAME JUST 13, clumsily conceived and woefully realised, exactly like this sentence. Then 22 more: wavy lines, iffy voices and wacky scrapes smeared with sap – You Are Lisa Simpson – comic books, blowfish and gorges. Next, 24 steps to greatness via the land of chocolate, Rancho Relaxo, abandoned wells and the Leftorium: outstanding achievement in the field of excellence. Then throw up your hands and raise your voice: 22 slices of majesty, bed goes down, streetcar, Gabbo, Jub-Jub, choo-choose me, MONORAIL!

These are the imperial years, of Bobo and the Be Sharps, the inanimate carbon rod, the Spruce Moose and the one-eyebrowed baby. Cursive writing does not mean what you think it does: on and up through a near-faultless Matlock Expressway of a season 6, cross-promotional one-off excepted. Up on the summit, the Simpsons’ universe now unfurls from chimpan-A to chimpanzee: a mother-cherishing, soul-bartering, neighbour-baiting, flying-hellfish, last-gleaming, solid gold house of a show. And again with season 8: we should thank our lucky stars that they’re still putting on a programme of this calibre after so many years.

But then: we make it five – the number of decent episodes in season 9 and sole reasons to cling to a series suddenly hurtling downhill. Fully into the gorge with season 10: look – Rupert Murdoch, Homer getting remarried while drunk, and Ned who is actually 60 years old. The world’s smelliest tumour, “Guess how many boobs I saw today, Marge”, Lisa tricking Bart and Homer into thinking they have leprosy. Downwards, ever downwards, Homer raped by a panda bear – just think about that for a second, raped – by – a – panda – bear.

Flashes of glory – I Am Furious Yellow – mere flash in pans: “The professor told us not to let him get a boner”. Sinking lower, still lower: breast implants for Marge, Skinner saying “wanking”, cameo from James L Brooks, Homer fearing he’s becoming a gay. “The Simpsons are going to (complete as appropriate)” and are also going to despoil the legacy of erstwhile legends like Homer’s mum. Now it’s season 16 – count ’em – and Patty comes out of the closet 200 episodes after it would have meant something.

Let’s do a pox party AND a satire on creationism as we can’t decide if we want to be crude or clever. Gore Vidal, Eric Idle again, Jon Lovitz again, The White Stripes, Stephen Hawking again, Metallica, Stephen Sondheim, Tom Wolfe, Kiefer Sutherland twice. The “most ambitious season yet” turns out to mean getting Lurleen Lumpkin from season 3 back for a few lines. New title sequence, high definition: who knows what barrels can be scraped between now and the time the show becomes unprofitable?

A third decade – is Gervais available again, because if not there’s the bloke who did Ali G or, get this, Rupert Murdoch – AGAIN. Wait: there’s no money, actors threaten to quit, there’s an episode with Moe pretending to be gay – could it, might it be…? But no – here’s season 23 – please let it become unprofitable, please let it become…

Related Items:"At this time of year - at this time of day - in this part of the country - localised entirely within your kitchen?", "Cartoons have writers?", "I am familiar with the works of Pablo Neruda", "I guess you might say he's barking up the wrong Bush", "I'm well aware of the irony of appearing on TV in order to decry it so don't bother pointing that out", "Not the box factory again", "Now who's being naive?", "That's-a-nice-a-doughnut", "We need another Vietnam to thin out their ranks a little", "What if I talk like this?", "You'll release the dogs or the bees - or the dogs with bees in their mouths and when they bark they shoot bees at you?"
Share
Tweet
Share
Share
Email
2 Comments