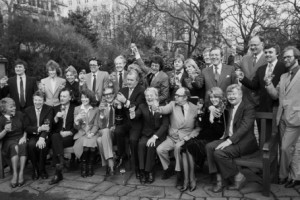 Posing for this world exclusive shot in the gardens behind Downing Street are the individuals who are to comprise the senior ministers in the first coalition government this country has had for almost 70 years.

We’re sure you’ll agree this is a historic photograph.

But just who are these noble practitioners of statescraft, hoping to guide Britain into a brave new world of cross-party huckstering?

A gonk personally signed by Ramsay MacDonald to the first person who can successfully name all (or as many as possible) of the figures featured in the picture.

And for the second person… a gonk personally signed by Ramsay MacDonald to share for five years with someone of diametrically opposed political opinions to yourself! (SATIRE)